Pogo the Cat AKA Mouse Hunter

Amsterdam is probably the most cat friendly place I have ever been. Cats are everywhere, in home and shop windows, sleeping under the tables in cafe's and restaurant's, jumping on your lap in bars and pubs. Up until 2 weeks ago I thought it was probably all part of the gezellig (cozy) Dutch charm.

Then it happened... Mats was woken up by something darting across the room on our second night in our new apartment, he bolted up and said "I think there's a rat in flat!" I got up in a panic and in the garbage we could hear what seemed to be a massive animal but only turned out to be a small mouse. For about an hour as we decided what to do, Mats heroically picked up the garbage and put it outside the apartment to deal with it in the morning.

The next morning after sleeping with my head under the blankets to make sure nothing crawled on me during the night. I decided we'd been duped into a mouse infested apartment. Mats mentioned this to his work colleagues who assured him mice are so common in Amsterdam that people basically live amongst them in fact they barely notice them (well some people). Of course why wouldn't they be common? Amsterdam has water, canals and old homes, it is the perfect place for them to take up residence. It was then that it struck me "THIS IS WHY THERE ARE CATS EVERYWHERE, mouse control!" (especially in shops that stock food) Mats agreed.

After a week with a high frequency sound blaster and keeping a meticulously clean apartment, our little friendly household mouse was still causing us sleepless nights. We decided that the Dutch had the most effective mouse control in action and this cat idea that had been in the air for the past few weeks was our best plan of action.

Everyone meet Pogo. She is our Mouse Hunter. We are in love with her already. 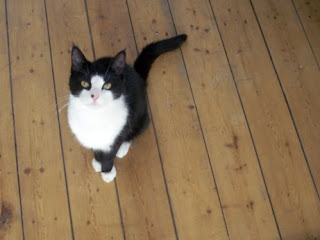 More pictures soon! (When she's more comfortable in her new surroundings, It has been almost impossible to get a decent shot of her, she is so quick and curious in her new home that she is a black blur in almost every shot).

Hoi Angela !
I am here reading your funny blog. I can imagine a cat is part of a survival kit in Amsterdam... When I studied at Molinos de Viento there were some huge rats there. My then colleagues baptized them with Spanish names.

How funny! I think if we started naming our mice we would end up feeling guilty when the cat played with them to death haha!

I'm following your blog (it's great) and wanted to ask you how dog friendly Amsterdam and its landlords are?

Myself and my boyfriend are moving to Amsterdam this summer with our two Shih-tzus and are apartment hunting at the moment.

How exciting that you're moving to Amsterdam. I am sure you will love it here!

I don't think you will run into any problems with regards to having dogs in Amsterdam. There are dogs everywhere and it is extremely dog friendly. Ive seen dogs on public transport, off the lead in most parks, and even with their owners in cafe's etc etc!

Also, I don't think you'll run into any problems with people/landlords objecting to you having dogs.

let me know how it goes for you when you get here!

I'll let you know how we get on.

ahahha! I too, had this problem when I first moved to Amsterdam. I'm not a big fan of cats so it was mouse traps for me! I hope Pogo solves all of your mouse problems and brings you and Mats lots of joy!

Pinkie,
I cant seem to find a pest control shop to buy mouse traps. Could you please advise me on where i could get some? The mouse in my flat are driving me crazy!! We've got one of those ultrasound high frequency blasters and there seems to be no improvement at all.
Thanks!

Lisa: I think maybe hardware shops might have them. But I am not entirely sure.

The soundblaster only works if you have got rid of all the mice, so turn it off and once you have caught them turn it back on... they're supposed to prevent more mice coming in because they mimic male dominant mice sounds, so real mice will think the place is occupied by an aggressive mouse and find somewhere else to live.

I hope this helps!

JI Angela,
I too live here, and all f a sudden ahve sleepless nights b/c of mice...looking for a cat. gooogles mice in Amsterdam and your post came up. Where did you get Pogo??? I need one. STAT.

We got Pogo from the Marktplaats it's an online market place http://www.marktplaats.nl/ there is a list of cats there that are free to a good home. This was perfect because Pogo was one year old and already very well trained and she came free with all her belongings- carrier, litter box, toys, bowls etc etc... Best of all we haven't heard a mouse since we got her :) Good luck! And let me know how you go!

Arrggg! We have a little mouse now too! The mouse friendly trap is a little too friendly, and the sound blaster doesn't seem to be working. I know this because I intentionally left a few dirty dishes overnight, and the kitchen counter was full of evidence (if you know what I mean). Too bad we already have a dog, so a kitty is out of the question. Maybe we could trade for a few days? hehe

@ Lizzy: Argh! That's how we knew we had one too! I was so grossed out!

That sucks! Unfortunately the sound blaster only works if you don't already have mice, it mimics the sound of a dominant male mouse, so new mice avoid the area. If you turned it on after your new little friend got there then it definitely wont work :(

There are some other ways of getting rid of it though... I am against killing any sentient thing (but I don't mind if Pogo does it since that's natural cat behaviour, though I have rescued several moths she has tortured) so I would suggest looking up on how you can get rid of it naturally, this site http://www.wikihow.com/Get-Rid-of-Mice-Naturally had a basic list that you can probably look into. I've keeping hearing the peppermint oil method, so maybe there's something in that...

Also your dog can probably hear the mouse blaster as it is probably in it's frequency range, so it's probably a good idea to turn it off :)

If you still cant get rid of it you can totally have our cranky cat in return for a happy doggy, for a few days haha! :D

Oh, I just saw this today. There are some interesting ideas there. The peppermint and steel wool are the most interesting to me. I think I'll give those a try. Thanks!

Picture my girlfriend and I playing a game of Scrabble in front of the fireplace in our beautiful new apartment. A commotion in the corner catches our attention just as three mice run through the middle of the game board...

After I stopped screaming like a girl, I stepped off the couch to google Norwegian Forest Cat. We wants us a cute and fluffy one that's a natural born killer.

Any other pest control tips would be appreciated. The landlord just wants to use poison but the thought of a litter of mice decomposing in our vents is rather unpleasant.