Book Review: The Book of Illusions By Paul Auster

The Book of Illusions is without doubt one of the best books I have ever read. 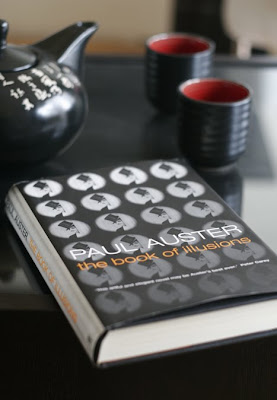 Six months after losing his wife and two young sons in an airplane crash, Vermont professor David Zimmer spends his waking hours mired in a blur of alcoholic grief and self-pity. Then, watching television one night, he stumbles upon a clip from a lost film by silent comedian Hector Mann. Zimmer’s interest is piqued, and he soon finds himself embarking on a journey around the world to research a book on this mysterious figure, who vanished from sight in 1929 and has been presumed dead for sixty years.

When the book is published the following year, a letter turns up in Zimmer’s mailbox bearing a return address from a small town in New Mexico inviting him to meet Hector. Torn between doubt and belief, Zimmer hesitates, until one night a strange woman appears on his doorstep and makes the decision for him, changing his life forever.

The Book of Illusions drew me in from the first sentence and because I couldn't put it down I (sadly) only got to know the characters for a very, very short period of time.

It is a difficult book to describe because the plot was simple, but what made it so hard for me to put down was the eloquent way Auster portrayed his characters, it was powerfully descriptive and so emotionally charged that I found myself chocking back tears several times. They were real, so real it was hard to believe they didn’t really exist, that they didn’t really live these experiences, even if their experiences and circumstances were unbelievable.

The story is told in several narrative layers and as it progresses you begin to see parallels between the lives of David Zimmer and Hector Man; both are broken, both are profoundly sad, both are guilt ridden and both are doing penance from events of random but tragic circumstance.

The Book of Illusions is packed full of symbolism of which I hear Auster is very well known for, but this was the first of his books I read and I intend to familiarise myself with more of his work, so waiting for me on my bookshelf is The New York trilogy :)

Email ThisBlogThis!Share to TwitterShare to FacebookShare to Pinterest
Labels: Books

"The Book of Illusions". I have just made a note in my agenda and maybe I can find or order it in my local library. 2010 is going to be a busy reading year for me, looove that !!!

I bought the New York Trilogy at the start of the summer but haven't got round to reading it yet. I can't wait to get started on it though - I've so many good things about Auster. x

oooo I've been meaning to try Paul Auster and read The New York trilogy, and I love a good book recommendation, so this one is going on the list! Thanks!

Anita & Amanda: I have both The Book of Illusions and The New York Trilogy and you're both welcomed to borrowing them!

Red Boots: I have just started reading it this week! I will make sure not to reveal anything :)